Telepathy is not remotely sensing what others are thinking and feeling as much as it is letting go of ones own identity and sensations for a time and inhabiting the others.

There is life. It is divided up into identities. Identities are a mental object, a created, artificial, impermanent idea. You can change what idea you are currently having. Tune into another identity, observe it, as it, and voila! You are telepathing. We all do this constantly at a sub conscious level all the time, this is called Morphic Resonance.

These mental objects, identities, whose are they? If identity is an artifice, there is no who, who is having the identity, it is just part of life as a whole, sectioned off temporarily.

Sometimes I think...(yea I do) that a big part of "enlightenment", you know, be E, buddha quality groking of life the universe and everything...

Is being able to believe a whole lot of entirely contradictory things, and know when to believe which.

Read The Diamond Sutra for further edification
Posted by Delicious Irony at 9:16 AM No comments:

Email ThisBlogThis!Share to TwitterShare to FacebookShare to Pinterest
Labels: The Diamond Sutra

Sometimes I want to fix broken people, but I can't. I'm broken myself.

Scientology. What was that all about? I wanted fixing and I planned to help fix others when I was.

Didn't happen and now its all gone to shit.

Not me, I haven't gone to shit. I'm still working on myself. Vipassana  meditation, now. Very effective. But it will take a LOT of incarnations. Not like the promise of scientology, freedom and eternity in this lifetime! Well maybe in the best case scenario...

Just watched a cute movie with Robert DeNiro, "Silver Linings Playbook" about two (well maybe a whole lot of) broken people who fix each other. And it wasn't about tech or meditation or therapy, although those help, it was about love.

That's where we all come from isn't it? Love?

That is our core, covered with shit, but the gem inside, love. 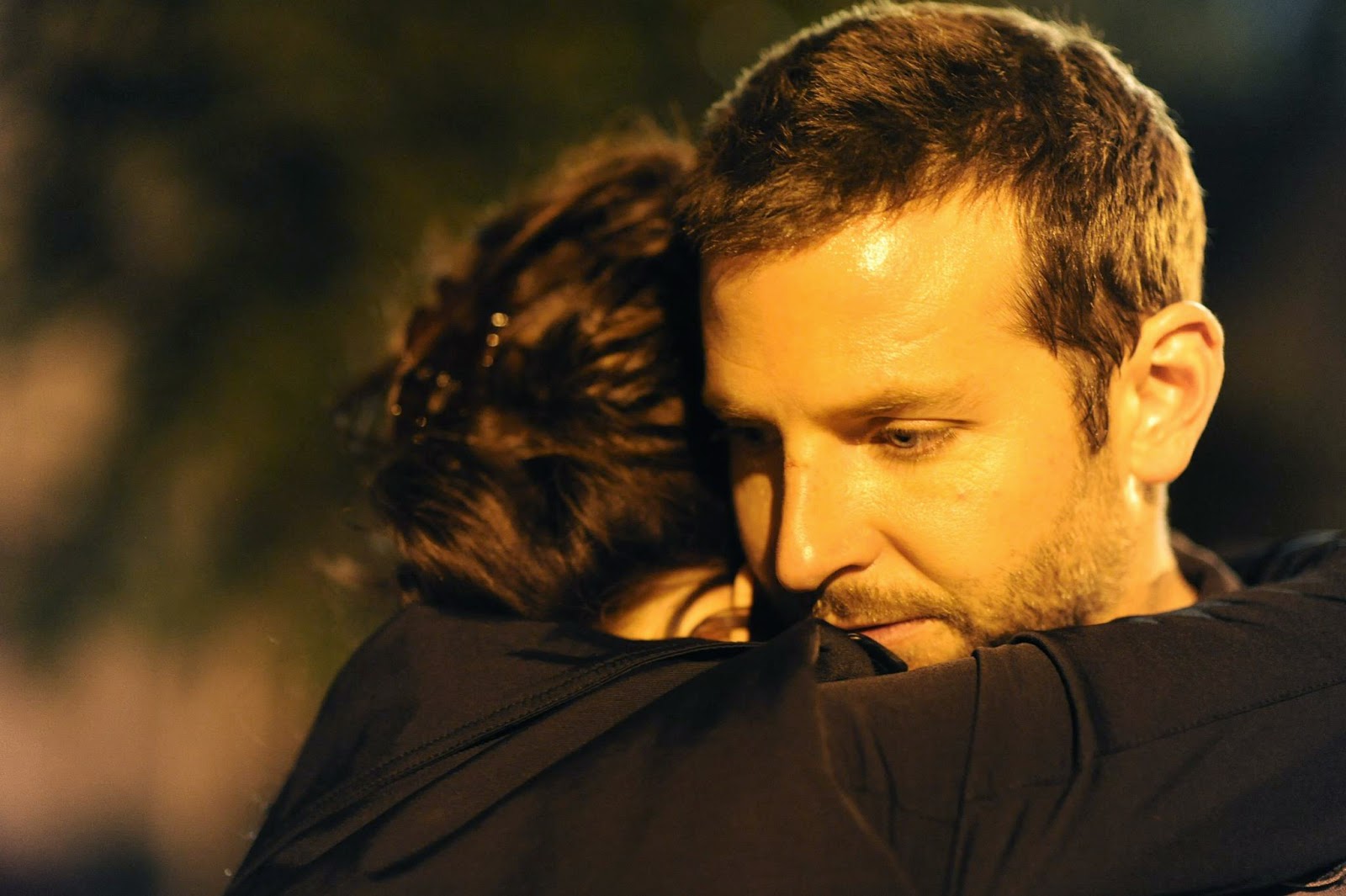 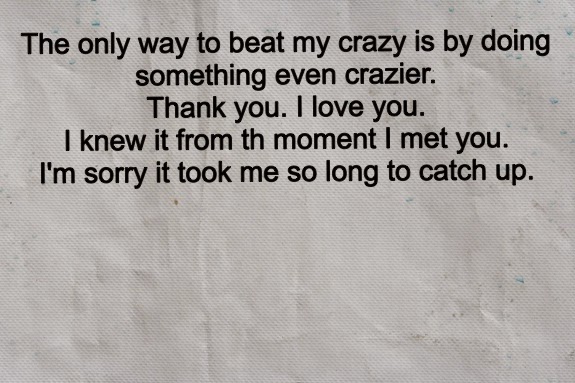 Posted by Delicious Irony at 8:37 PM No comments:

Email ThisBlogThis!Share to TwitterShare to FacebookShare to Pinterest
Labels: scientology

"An individual who is bent mainly upon survival is intent usually upon
changing things."

"An individual who is close to being destroyed is bent upon stopping
things."

"An individual who has a free heart and mind about life is bent upon
creating things."

The Fundamentals of Thought
Copyright (c) 1952 by L. Ron Hubbard
Posted by Delicious Irony at 9:25 AM No comments:

If truth can not stand proud of the noise, be self evident in the face of falseness, perhaps it is not truth but yet further opinion, just YOUR viewpoint, asserting rightness. An easy facsimile, for the yet unconfronted......

Posted by Delicious Irony at 8:34 AM No comments:

A human being should be able to change a diaper, plan an invasion, butcher a hog, conn a ship, design a building, write a sonnet, balance accounts, build a wall, set a bone, comfort the dying, take orders, give orders, cooperate, act alone, solve equations, analyze a new problem, pitch manure, program a computer, cook a tasty meal, fight efficiently, die gallantly. Specialization is for insects.
-Robert A. Heinlein
Posted by Delicious Irony at 12:11 PM No comments:

Spiders in her mind..

I got a call from someone associated with a cult which I am also associated with. She called me while I was grocery shopping, wanting to discuss what sort of problems I had with our mutual obsession.

Contrary to the stated principles and earlier culture of said cult, she wanted to use anything I said as an opportunity to preach to me about how wrong I was. She being a member of the cults International management, who had worked with the cults FOUNDER and also works under its current chairman, and she is a member of its elite paramilitary unit that is tasked with perserving the organization and putting ethics in on the planet.

I listened to her and offered not too much in the way of arguement, but honestly told her my concerns. She characterized it as me repeating an enemy line, saying I was parrotting what others had fed me. I felt that perhaps I did still possess the capability of independent thought and that she was being unfairly judgemental.

We ended the conversation with her saying she could not stand to share my universe.

So much for being able to experience anything, and having the abilities our cult promises.

I think she has spiders in her mind... 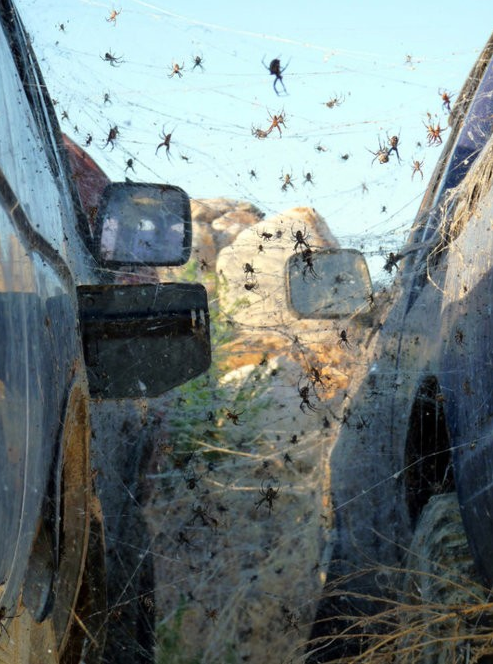 Posted by Delicious Irony at 9:35 AM No comments:

Ian Ironwood posted the below which I have excerpted from his excellent blog;


And not be a Beta as described in this...


http://thesexnerd.blogspot.com/2011/11/blue-pill-or-red-pill-two-approaches-to.html
Posted by Delicious Irony at 1:19 PM No comments:

I'm apparently balanced. Try the quiz linked at the bottom. 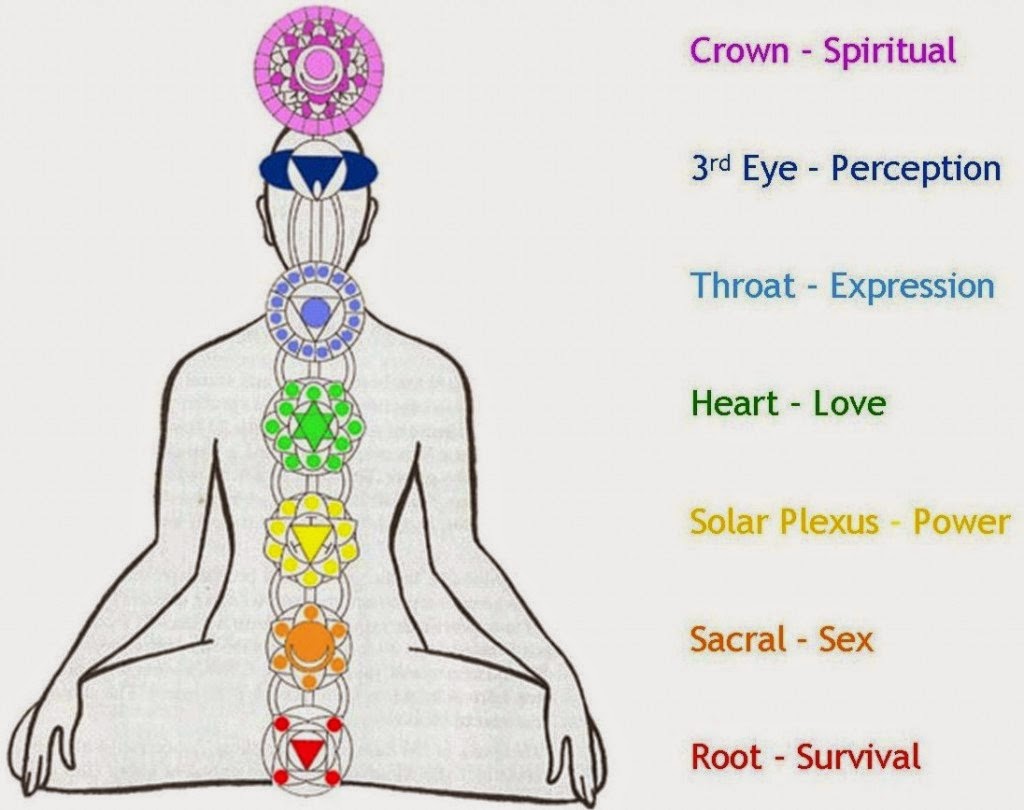 Tuning chakras..
Posted by Delicious Irony at 8:59 AM No comments: 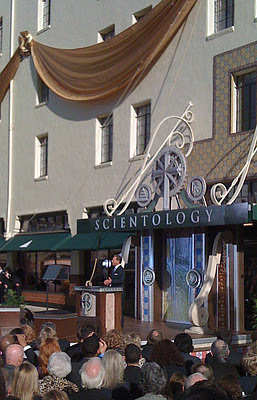 I saw David Miscavige yesterday, he had a really bad dye job on his hair. It looked so fake. Externally fake as he seemed as a human being inside. Not that I have met the man, but reading of his deeds has given me the impression that he is disconnected from the lives of the majority of this planet.

His girlfriend/personal assistant Laurise was there too. Also with a bad dye job. Hers was an attempt at jet black, that seemed synthetic, just a hint of blue that never really happens in natural hair in natural light. She made her appearance a few minutes before him, sat in their side by side seats, and smiled demurely when recognized by those who know.

Later I stood next to the matched black chevy SUV's with blacked out windows and obvious mercs inside, till I was noticed.

I noticed when he speaks that it hurts to listen to the senseless strings of words that he so well practicedly speaks. I noticed that as a being he was as hard as some metal a UFO may be made of. He comes across as something so manufactured, so deliberate, as to be not real.

The crowd adored him and were so excited to see him, whoops and hollers to his faux shy dips of the head in recognition to the adulation.

Later he disappeared into the building to be separated off from the common attendees behind velvet ropes and dedicated sea org minions, where he deigned to be photographed with the VIPs, the big donors, and their families.

I wonder if the kids, still innocent in the ways of pretending, or of self delusion, saw him as he is? Or did they follow their parents lead and gush and fawn?

I had a knife in my pocket. There to clean my fingernails, but reminding me to be careful around his security, some obvious, some not so. Wouldn't want the wrong idea to take fire.

I didn't carry out my fantasy, to call out in a lull in his spiel, "WHERE'S SHELLY? WHERE'S HEBER?" I would have been lynched. Or at least spoiled the day for people I have sympathy for. They were well protected, these scientologists, these experts at communication. Eight foot tall fences kept the public from viewing the event, or from saying something that was too gruesome to receive as communication. Scientology kills! Or L Ron Hubbard lies! 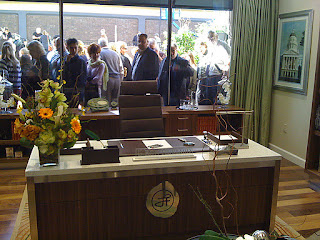 Irony in the extreme, how protected, or excluded scientologists need to be, when they think they are the only ones who can save the planet. Save it from What? Themselves? Or more at save it for themselves. And discard, without sorrow, the undeserving who do not recognize the gift offered by by scientology and thus don't deserve it, or consideration as fellow humans, or at least being heard as such. 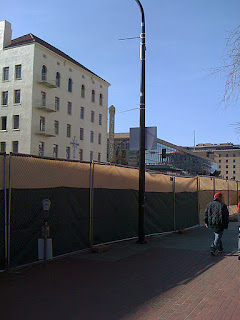 I wonder if there will be repercussions for writing this? I wish that those who will be hurt by it and shun me for it, could understand how I came to think and feel this way, when I have been as much a true believer as them.

I wonder if I am 1.1 for having gone, with all my thoughts about things being wrong in the church? I was certainly covert, clapping in the right moments, smiling and making conversation..I didn't feel false, or really even hostile. I like the people, like the goals, like the concepts. I had to see for myself though, who Miscavige is, and where the church stands.

It now has very nice quarters, but did it lose its soul?

David, call me, I'll buy us some mexican food and a few beers and we'll talk openly, if you can confront it. First thing I'd ask though is, where is your wife.
Posted by Delicious Irony at 2:55 PM No comments:

I'm sex addicted...I like to fuck with your mind.

Posted by Delicious Irony at 9:27 AM No comments:

The Little purple notebook, "How to Escape from the Universe", shows how, but why?

"Gotamo Siddharto, a local Prince in India 2,500 years ago, after going through most of the many spiritual and physical exercises that were  taught at his time, decided to try a radically different approach and eventually succeeded in waking up from the dream of life to a state beyond this Universe.
Gotamo asserted a 'state' that is fundamentally independent of the system of this Universe. Since labels can only be attached to phenomena that are within a system, there cannot possibly be a name for this state and even classifying it as a 'state' is therefore, strictly seen, incorrect. Likewise, whoever is able to reach this 'state', cannot be labelled either.
The only possible approach to this 'state' is an _indirect way_.  Therefore, Gotamo taught a way of thinking in exclusive terms rather than the common way of thinking in identities.
For example, contemplating 'self' is necessarily an identifying and self-reflexive way of thinking and it cannot possibly lead to the 'way out'. In the contrary, since thinking in identities is the very condition that is holding Beings in this Universe in the first place, self-reflexive thinking will INCREASE the bonds that prevent a person from being able to have the choice of withdrawing from this world. " Little Purple Notebook, Chapter 16

I contend that breaking the desire to be here is the whole of it really, not how.

It's like school for kids, they complain and say they don't want to be there, but when they are not in school, they complain there is nothing to do and no one is around.


The universe is where the action is, where friends are, where games can be played, where love can be found.


Leave? Yea well try playing with your friends with no universe! Try loving…..alone.


Where ever two or more gather…there is a universe! And leave this one and you will just create a new one out of loneliness and boredom after a bit of rest.
Does that mean this is hunky dory? This universe? No, but its not so bad if your in decent shape.


What do I mean decent shape? Well you should have the ability to leave the universe if you need or want. And the ability to be in it and not brought down to the point of no longer being able to leave it!

Posted by Delicious Irony at 8:17 AM No comments:

Posted by Delicious Irony at 8:26 AM No comments:

Email ThisBlogThis!Share to TwitterShare to FacebookShare to Pinterest
Labels: fuck you andy, poetry

Nora was a young woman I was fairly sure was a lesbian the first time I saw her. She was thinnish and had a way of looking at 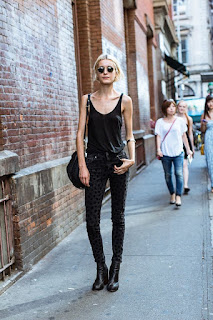 Delicious Irony
I find that whatever identity I use, I restrict myself in what I say. Here I will try to have thoughts without too much identity. Ah freedom....

Other stuff I find interesting